Donald Goucher is a popular children’s writer blessed with a wildly fertile imagination. Goucher’s tales of a mischievous pig called Hiawyn have become so dark that they are now seriously unsuitable for children. But the ugly side of Goucher’s imagination will become extremely useful to Colonel Sollis, supremo of a military dirty tricks outfit. Sollis sets Goucher to work writing stories about Hiawyn making mischief behind enemy lines – a lethal shaving brush, an exploding souvenir of the Eiffel Tower, a deadly Chianti bottle. And as Goucher beavers away doing his patriotic duty Hiawyn becomes ever more fiendish and corrupt with disastrous and terrifying consequences… 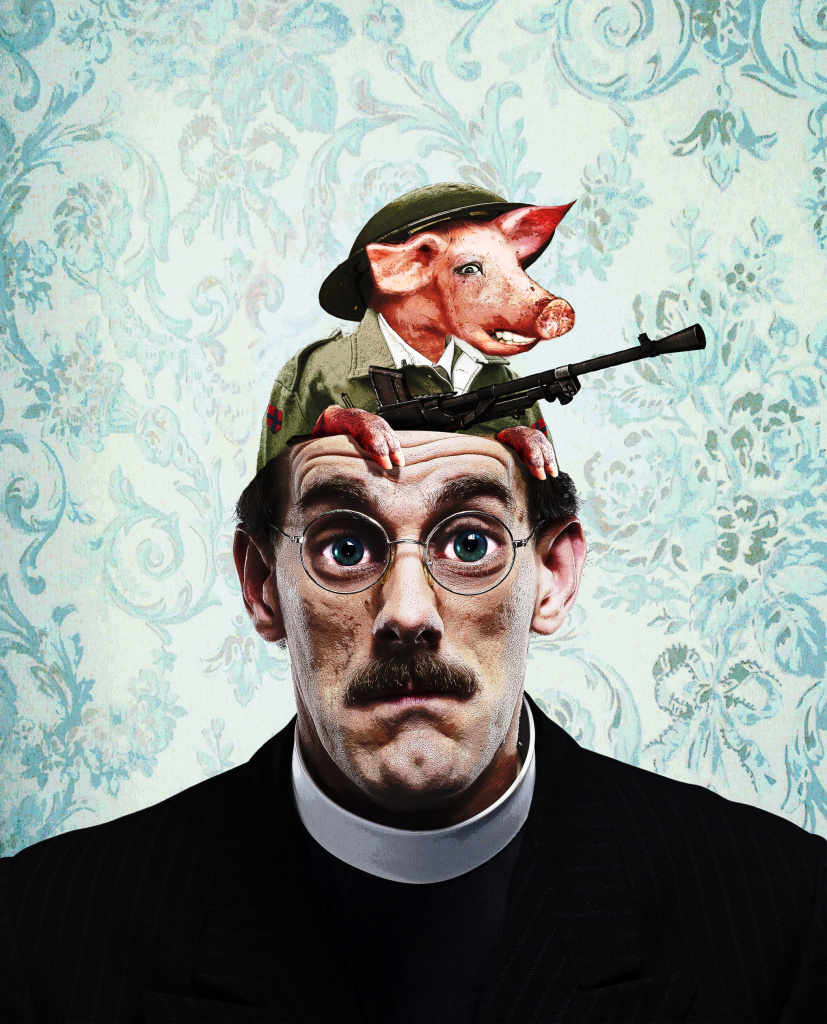 As always with this company, the telling is an inventive delight….An impressive parachuting of the audience into quickly assembled worlds and characters you care about instantly, buffeted by big questions that are delicately, tenderly explored
****

Comic, thought-provoking and deeply poignant. With sterling performances throughout, this fast-paced story captivates and engages its audience

Nikki Sved directs with superb attention to detail for a very entertaining, amusing and thought-provoking evening
*****

A fantastic production which we enjoyed immensely. Thought-provoking, funny and tragic. Great theatre!

In the summer of 1940 things looked decidedly bleak for Britain. Germany had stormed into Poland, Holland, Denmark, Norway and France in the blink of an eye and it seemed very likely we were next. The U.S. weren’t yet ready to join the war. What was to be done? Desperate measures seemed called for.

Thus the idea was born to help occupied Europe wage a guerrilla war against the Nazis from within. In July 1940 the Special Operations Executive was set up with express orders from Churchill to “set Europe ablaze.” Over the next six years SOE secretly channelled weapons, equipment and specially trained agents to help resistance movements all over Europe and, eventually, throughout the Far East too.

In 1941 SOE set up a research facility at the Frythe, a former hotel in Hertfordshire, called Station IX. Here they developed every piece of kit conceivable for espionage and sabotage. The full scope of their ingenuity only came to light as recently as 1990s when secret wartime documents were finally de-classified. One of the most fascinating was the two-volume, “Descriptive Catalogue of Special Devices and Supplies”, SOE’s summary of the equipment they’d developed for use in the field. It reads like an Argos catalogue of mayhem and destruction. This, from the section on “Anti-Personnel Incendiary Devices”:

“Incendiary Shaving Brush – A normal shaving brush handle is hollowed out and filled with pure metallic sodium. A small hole is bored in the stub… to allow water to seep through, and when the brush is used the sodium is ignited by contact with the water.”

There are guns to be hidden up sleeves and “thumb knives” to be sewn into clothing. There are exploding books, cigarettes, Chianti bottles, bicycle pumps, torches and dead rats. There is super-strength itching powder, best applied “…to the inside of underclothing”. There is abrasive powder to seize up machinery and cream to permanently frost glass.

The imagination shown is staggering. To my mind, the inventions seem to possess a distinctly absurd sense of humour. Many of them could have been gleaned straight from a Heath Robinson drawing. But comical as they might seem, their intent was deadly serious. Major General Colin Gubbins, commander of SOE operations, had served during the Anglo-Irish War (1920-21) and adopted many of the IRA’s guerrilla tactics on behalf of the service. Some had qualms about the morality of these tactics:

“Some of the things we did could be termed atrocities. They couldn’t be termed warfare – not blowing up people with torches. I didn’t lose very much sleep about it but to my mind we were maiming people, we were taking away their hands or their arms, their means of sustenance… I still remember being in this shed, doing these jobs that I was doing, and knowing what was likely to happen as a result and not quite liking it.”
Jack Knock, SOE Technician

But generally, a steely sense of purpose prevailed at Station IX:

“The whole reason for us being there was to be creative and to protect the people who were doing the awful stuff, trying to get at the enemy.”
Marjorie Hindley, SOE Technician

Reading about the fiendish ingenuity that went on at The Frythe it struck me how much the human imagination must be both stimulated and suppressed in wartime during any era. Stimulated, in that new weapons and strategy are key to winning wars. But suppressed, in that you have to strive ruthlessly not to imagine the suffering of your fellow human beings, friend or foe, in order to fight at all effectively. Surely both ways of thinking entail the worst abuse of the imagination conceivable.