Who was it who said that the truth is rarely pure and never simple? Theatre Alibi takes a barefaced peek at fibbing. To the sounds of 60s girl bands and tricked out with visual kitsch, Little White Lies conjures a world where cash machines pour forth money and politicians beg forgiveness. If you’ve ever told a whopper yourself, this show’s for you. 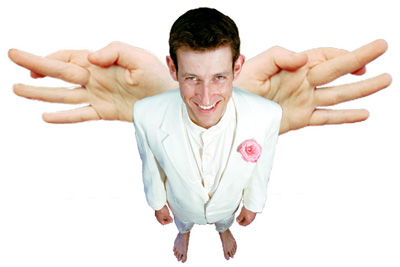 A company of enormous, curious inventiveness

Alibi’s style has won plaudits all over the country

I saw an extraordinary photograph of a simple birth rite that takes place in the forests of Eastern Europe. A woodsman had split a living sapling in two, leaving it joined at top and bottom. The tree was wedged wide open and the woodsman and his wife were passing their young son through the gap. The sense of the photo was one of danger, that the tree might snap shut and nip their son in two.

Our show is about all sorts of moments when people find themselves in the gap between the perceived truth and a distorted version of it. Having stepped into this precariously wedged hole between fact and fiction, they might find it in danger of snapping shut on them. Our stories aren’t cautionary though. A great deal of life surely has to be lived in this dangerous place. When the woodsman and his wife enact their strange baptism they seem to be offering their son life with all the dangers it will inevitably entail for him. To live in the safety of unambiguous truth is as unlikely as it is dull.