Our bodies haven’t changed much in the last forty thousand years. We’re still suited to hunting and gathering through the dappled green light. It’s a long way from the savannah to Safeways. And yet here we find ourselves, apes with trolleys, browsing through the part-baked and the dry-cured, the oven-ready and the virtually-fat-free, wondering why we always get the one with the wonky wheel…

Theatre Alibi wheel you through the supermarket experience with flair and visual panache to the warm, passionate music of Spiro on mandolin, fiddle and guitar.

By turns daft and deep, Shelf Life finds humanity lost amongst the aisles. 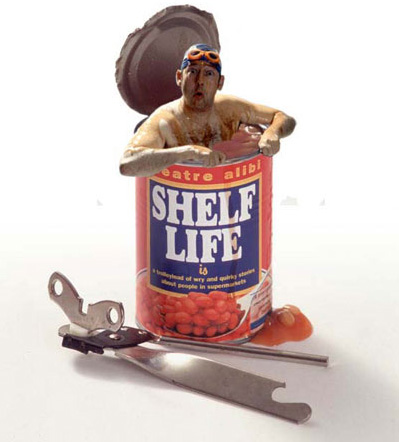 Shelf Life has a sense of magic and emotional range that will have you laughing out loud one minute and have tears pricking at the back of your eyes the next. Wonderfully evocative music from Spiro adds to the quality mix

At times Shelf Life is hilariously funny, at others so moving that even this hard nosed journalist had to hold back tears

“…since even quite common men have souls, no increase in material wealth will compensate them for arrangements which insult their self-respect and impair their freedom.”
R.H. TAWNEY – RELIGION AND THE RISE OF CAPITALISM

I worked in a new Tesco a few years ago, stacking the shelves by night. At the side of the store the remaining trees of the forest on which the supermarket was built pressed against the glass windows. In each aisle one person stacked through the night, alone like a grub in a cell of a honeycomb. To me it felt as if the building had landed on top of us, flattening the forest around us but leaving us standing, like Buster Keaton when the front of a building falls on him but leaves him standing in one of its windows. Where the trees had been, rows and rows of shelves had arrived and separated us from each other in the aisles.

In the grand scheme of the history of the human race we’ve come from the forest to the supermarket very quickly. Anatomically, we haven’t changed much in the last forty thousand years. Physically we’re still suited to being hunter-gatherers in the forests that once covered the planet, and yet here we find ourselves in places like supermarkets. It’s a long way from the savannah to Safeways. Is it any wonder we sometimes feel a little lost?