Spies is a bittersweet evocation of childhood with a gripping mystery at its heart. Set during the Second World War in a quiet suburban cul-de-sac where gardens – and dark secrets – lie behind neatly trimmed privet hedges, Stephen and his friend Keith play at detectives. But the game changes gear when Keith announces that his own mother is a German spy. The hunt is on in deadly earnest and nothing will ever be the same again…

Michael Frayn is an award-winning playwright and novelist whose numerous stage triumphs include Donkeys Years, Noises Off, Copenhagen and Democracy. His novels include Headlong, Towards the End of the Morning and Spies, which won the Whitbread Novel of the Year award. 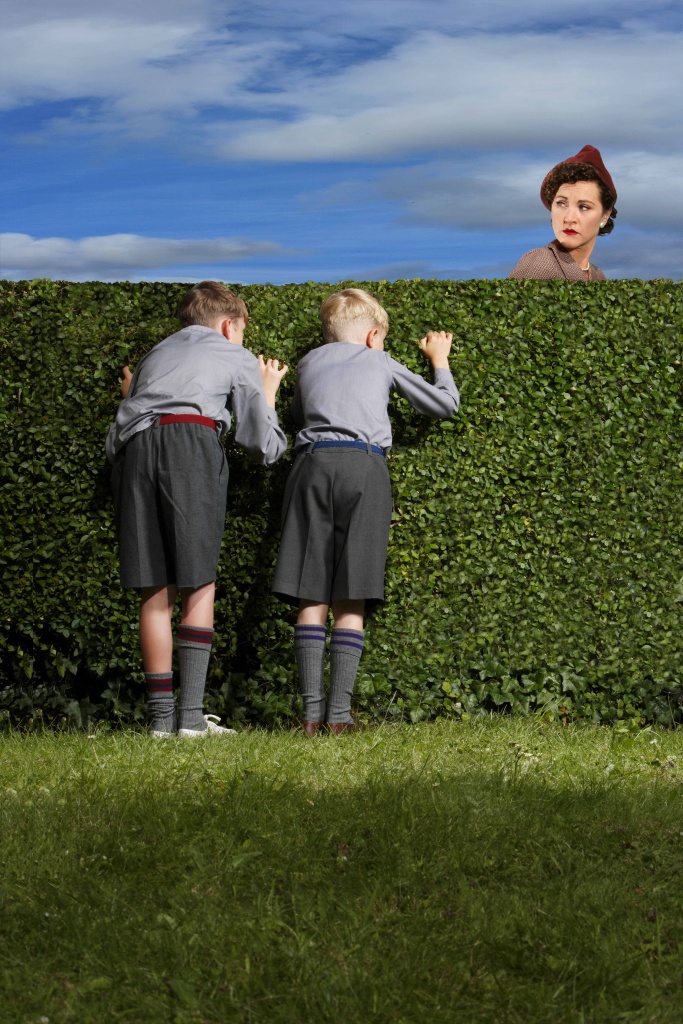 Nikki Sved’s direction effectively suggests a score of suburban settings and the flash of shears being sharpened seen through the wall of a shed becomes a powerfully sinister hint of what might follow.

Stylishly translated to the stage from Michael Frayn’s novel, Spies is by turns witty, exciting and warmly nostalgic

With a superb set, peerless acting, excellent sound and lighting and atmospheric music , this Theatre Alibi and Oxford Playhouse co-production is an absolute triumph

Daniel Jamieson’s adaptation of the novel is faultless. Spies is dark and unsettling but also hugely funny and entertaining, with mesmerising performances

n Michael Frayn’s novel, Spies, the seventy-four year old Stefan revisits his childhood neighbourhood and tries to piece together the events of a particular summer when he was nine years old. The story is told in Stefan’s voice and seen through Stefan’s eyes. That’s part of what I find so rich and powerful about the novel, how an old man remembers his nine-year old self. But what to do in a stage adaptation? One could cut the elder Stefan completely and write a straight play about a 1940’s schoolboy getting out of his depth but that seemed a shame to me. So we’ve kept old man Stefan in the frame, bodily inhabiting the world of his memory, our spy in the mysterious realm of the past.

It’s a particular smell that sets Stefan off on his journey.

I feel… what? A restlessness. A longing to be over the woods at the end of the street and away, away. And yet at the same time I have a kind of homesickness for where I am. Is that possible? I have a feeling that something, somewhere has been left unresolved, that some secret thing in the air around me is still waiting to be discovered.

Another hint of it as the summer breeze stirs and I know that the place I should like to be off to is my childhood.

Straightaway we share with him not only the miraculous immediacy with which a fragrance can take us to the heart of a memory, but also the emotional power the memory can have. Straightaway, magically, we’re parachuted into the thick of that long-lost summer with Stefan.

And yet we also share with Stefan a sense of the fathomless mystery of the past when we get there. At one point in the book the aged Stefan can picture vividly his nine-year old head peering out of a hedge and yet feels utterly mystified as to what was going on in that head, even though it’s his own. Why did things turn out the way they did? What was everyone thinking? No omniscient narrator, is Stefan. He struggles to puzzle it all out. We puzzle with him. Like Stefan, we are spies with incomplete intelligence.

It’s not just to do with it all being so long ago. Secrets abound wherever we look. Secrets that grown-ups kept from children, from each other, some things people wouldn’t even admit to themselves… What chance could a nine-year old boy have of understanding what was going on? It’s no mistake hedges recur in the story. At first, old Stefan feels nostalgic for them, like long-lost sentinels of gentility, so varied and well-kept, but soon they take on darker connotations. They come to feel more like shrouds behind which each house hides its secrets. It’s no mistake either that young Stephen spies on his neighbours from within a hedge. From there he is bound to see things he’s not meant to.

And the scent that so transports Stefan…? Watch the show and discover. It retains its power over him to the last page, and beyond, presumably:

And, on the air as I turn the corner at the end of the street, a sudden faint breath of something familiar. Something sweet, coarse, and intimately unsettling. Even here, after all. Even now.