The Crowstarver is a gripping and moving story set in a close-knit rural community in the early days of the Second World War. When a baby is found abandoned in a lambing pen he is adopted by the shepherd Tom Sparrow and his wife Kathy. As the boy grows up it’s clear to everyone that the mystery of his birth is not the only thing about him that’s special. John Joseph turns out to have an extraordinary gift with animals of all kinds. Foxes will eat out of his hand, hares and otters come close and he can even gentle a bucking bronco in true horse whisperer style. As the years pass, being different means John faces threats of all kinds, from ignorance and prejudice to the war itself, which brings its own share of tragedy. Full of unforgettable characters and scenes The Crowstarver combines an inspiring and heart-warming story with powerful performances, beguiling animal puppets and a stunning live score.

First brought triumphantly to the stage by Theatre Alibi in 2006, The Crowstarver toured again to delight a whole new audience of adults and young people from eight upwards. 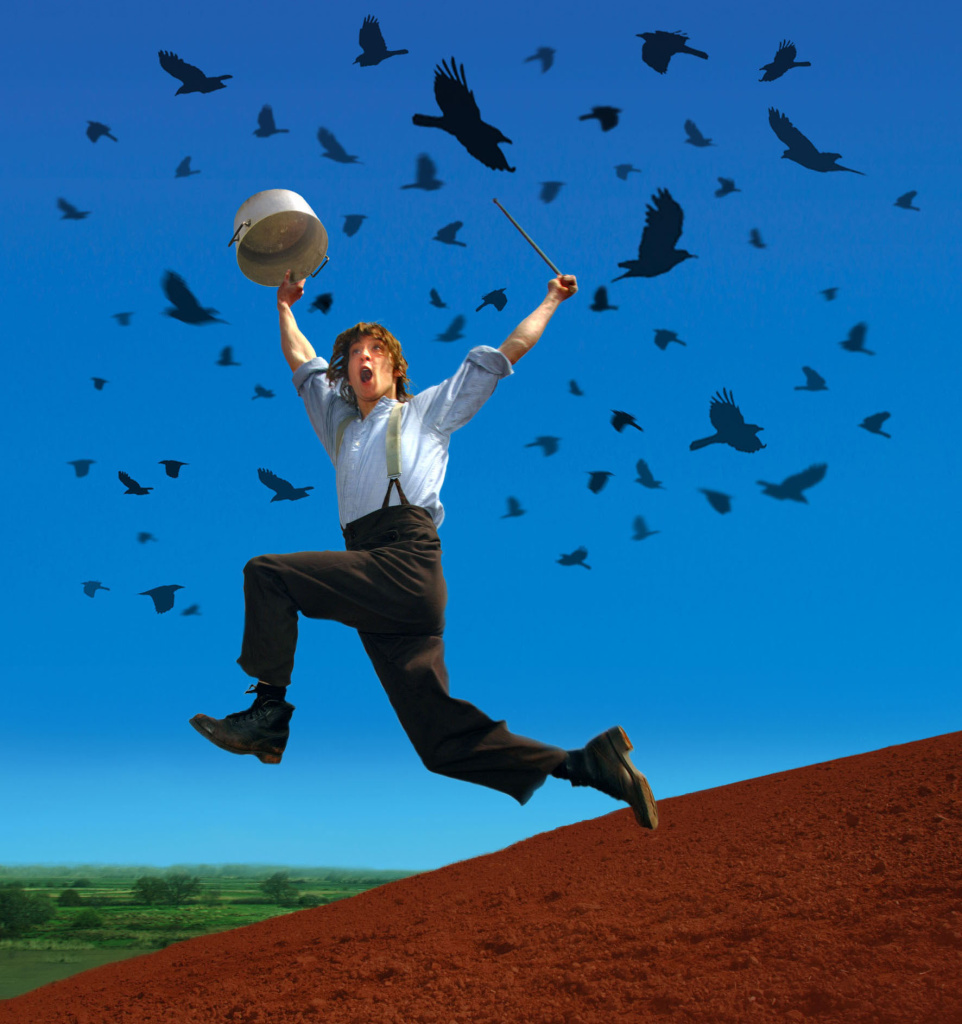 Immensely enjoyable theatre for children of all ages, and despite the tears you may shed, as cosseting as a warm hug.
****

“Of all the books I’ve written, The Crowstarver is one of my favourites,” Dick King-Smith told us as we sat by a crackling fire in his tiny cottage in rural Gloucestershire in 2005. Sadly he’s died now but the director Nikki and I were lucky enough to meet him while preparing the first production of our show. In person he seemed very warm, funny and plain-speaking but not in the least sentimental. And yet, I think, the book reveals him to be a deeply emotional man, passionate in his love of animals, the countryside and its people. It was this depth of feeling that made us want to put the story on stage.

We asked what had inspired him to write the book. He told us how he’d worked as a farmhand when he was eighteen on Tytherington Farm in the Wylye Valley in Wiltshire before he went off to fight in World War Two. He talked about it fervently, as if he was suddenly seeing it all again in bright summer sunshine. It was still farmed in the old way then, requiring many hands to do the work. In his autobiography he describes the sheer manual labour of it:

“These days machinery reigns and there is almost always a tractor with something on the front or back end to do the donkey work. But then we were usually on our flat feet, holding a hoe or a fork or a rake, spade, pickaxe, crowbar, sledgehammer, beetle, billhook, reaphook, slasher – the list is endless and there’s a right way and a wrong way to handle each.”

Also he talked about the great number of people still working the land then. In 1940 Tytherington still employed a farm foreman, a horseman, four poultrymen, a shepherd and numerous labourers, all colourful personalities many of whom had lived on or near the farm for generations. These sorts of characters are portrayed in The Crowstarver with real fondness and candour.

And who inspired Spider Sparrow, the boy in the story? “When I first came to this house in the sixties,” said King-Smith, “there were five dairy farms in this little hamlet alone. Now there’s not one. But then, the lane was often full of cows going to and from milking. Every day a boy, the son of one of the cowmen, was herding the cows back and forward. And you know the only conversation we ever had, rain or shine? “Good ‘un!” he used to shout, as cheerful as anything. And so I used to reply, “Good ‘un!” and we’d leave it at that.”

In the story the dawning realisation on the farm that Spider has learning difficulties is greeted in various ways, not all of them kind. But there is a plausible and moving determination of many to help Spider fit in. From early on it’s clear the boy has a special relationship with the natural world and it’s through his gentle mastery of animals that Spider finally commands respect from everyone on Outoverdown Farm. Dick King-Smith loved animals. He kept a multitude of pets as a boy and became a farmer when he grew up partly so he could carry on collecting animals. I think there is a lot of King-Smith in Spider. The near-magical way that animals approach Spider without fear must surely reflect a childhood fantasy of the author’s.

The relationship between Spider and his mother and father is painted with great tenderness in The Crowstarver and that’s at the heart of the book for me. When Spider is old enough for his parents to realise he’s different from other children they are upset but soon determined to nurture his unique talents. When he’s bullied they’re heartbroken. When he triumphs they glow with modest joy. Dick King-Smith evokes the emotional rollercoaster of parenthood with particular intensity in the story.

Finally, there is a yearning in the story for a harmony between humanity and the natural world. We can’t turn back the clock and all become farm workers once more, but our rural landscape sits patiently waiting for us to attend to it. The Crowstarver makes us feel our lives would be richer for doing so.