Imagine London’s suddenly as cold as Siberia. Imagine pushing a pram through a snowdrift every day to get to the shops. You’ve got to wrap the nipper up like an Eskimo or it’ll freeze into a little block of ice. Sarah and Mark can’t get their heads round having a baby just now. Sarah because it won’t stop snowing. Mark because his heart froze a long time ago. The Freeze – love and pain wrapped in a blanket of snow. Featuring a haunting vocal soundtrack by SPIRO. 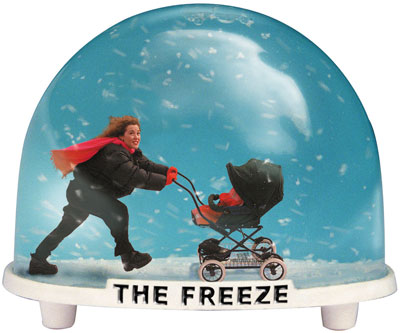 Surprising, evocative and sophisticated storytelling from a company with a youthful vibe

This small company knocks spots off many West End productions

I wanted to write about how people respond to change in their lives, big change, the sort you haven’t necessarily chosen, that fate visits on you unexpectedly. I was interested in those moments in our lives when an external shift of circumstance lays bare a hidden, emotional terrain. The advent of a child seemed like one such moment in people’s lives.

I wanted to set my story in a world that reflected this sense of fundamental change – a familiar world and yet somehow suddenly, massively, irreversibly different. At the time I was thinking about the effect global warming might have on the Gulf Stream. The Gulf Stream has warmed our shores for millennia. Without it our country would be much colder than it is now. Labrador in Canada is on a similar latitude to Britain but experiences temperatures in January as low as minus twenty Centigrade compared with ours of about five degrees Centigrade. The Gulf Stream goes round like a conveyor belt – warm water flows towards Britain on the surface, cools and sinks in the Arctic and slowly returns south along the ocean floor. Scientists now fear that global warming might suddenly stop this conveyor belt effect, and spell the end of the Gulf Stream. Without the warmth it brings us, Britain would suddenly become as cold as Labrador. From one year to the next a new ice age would begin.

So, in The Freeze, two lives are swirled up in the first snows of a new, British ice age. Or more accurately, three lives…