Someone’s pinched Pam’s Elizabethan sideboard. So she signs up for her local Neighbourhood Watch. With the aid of her nephew who works in security, she swiftly graduates from curtain twitching to spy cameras hidden in hand-knitted novelties. But what Pam unearths only confirms what she already suspects – that everyone around her is a thief, a pervert or a terrorist (or perhaps all three) and that they are all on the verge of heinous crimes…

A sharp sideways look at what former Liberty Director Shami Chakrabarti describes as the issue of our times – how the relentless monitoring, collecting and hacking of every inch of our lives has run completely out of control. 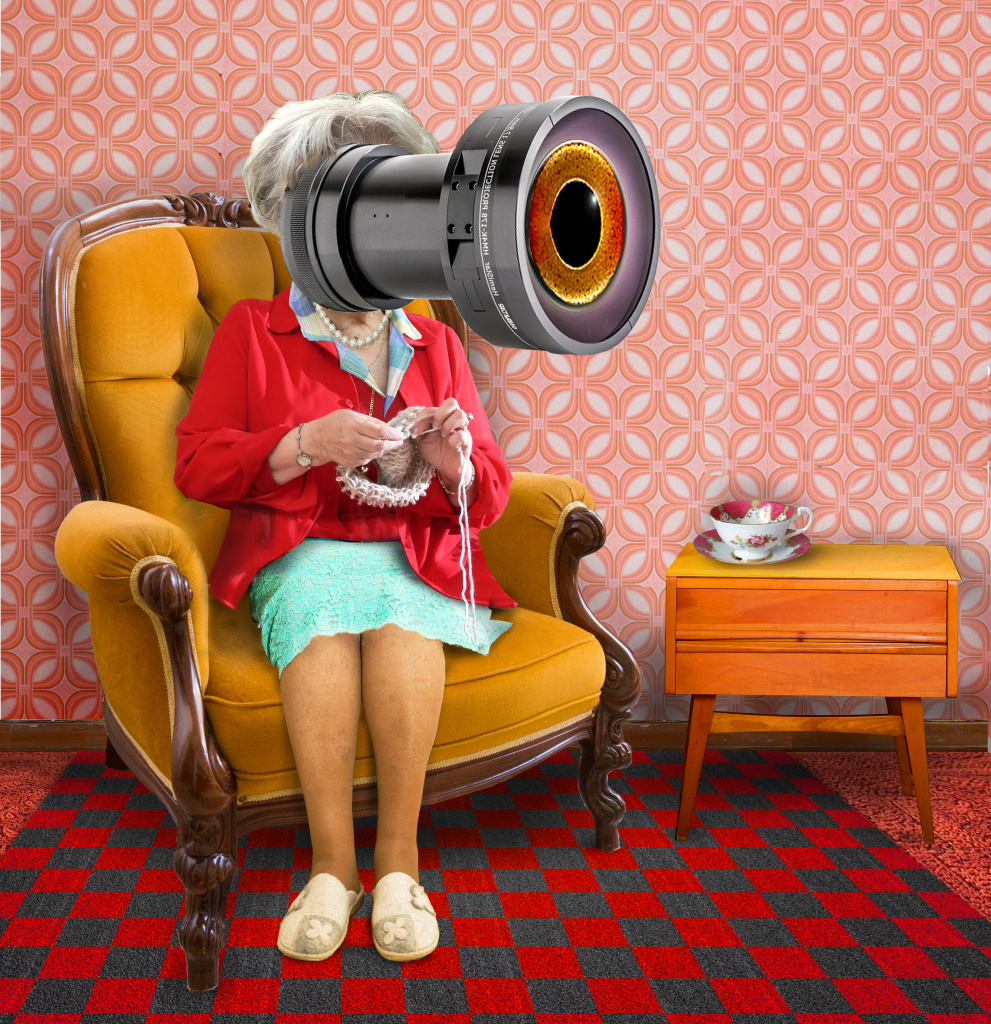 As I write this, the Investigatory Powers Bill, or Snooper’s Charter, is about to become law. It will allow the State to gather and hold the most revealing private information ever about the whole British population from our phone and internet use – who we’ve talked to, what we’ve said, where we’ve been, what we’ve been up to – whether we’re suspected of any crime or not.

The aim is to keep us safe from harm – serious crime, terrorism – but some security experts question whether this broad scale surveillance will make it harder, not easier, to find the criminals and terrorists among us – the bigger the haystack, the harder the needle is to find. Also, our phone and internet data is very revealing about us, but it doesn’t give the whole picture of who we are. In fact it might give a very misleading picture, confusing the hunt for the real wrongdoers in our midst.

Then there’s the question of privacy. If we’re watched in private we feel violated, perhaps because it’s only when no-one else is looking that we are the free-est version of ourselves, warts and all. People may do things in private that other people find unsavoury, but as long as that behaviour remains in private, is it truly anyone else’s business?

Fish Eye is a game, a sort of mind experiment. It translates all this spying business into the world of you and me. What if a woman – let’s call her Pam – decides, perhaps with good reason, to spy on her neighbours? How might she go about it? There’s a lot of affordable gadgetry on the internet nowadays. But, even with all the latest gizmos, how hard might it be for Pam to fathom what’s really going on in the private lives of those around her? And if we were to turn the tables and spy on Pam in the privacy of her own home, how might we feel about what she’s up to? Is her snooping justified, or is she going somewhere decidedly dodgy?