Some pretty odd ideas are floating around Paul’s street. There’s Mabel, whose brother hides under a brown paper bag. And Clarence the poodle who thinks he can fly. But Paul has the oddest idea of all. He thinks that the moon is a big hole in the sky and he’s going to climb into it…

Anything’s possible in this warm and very funny story by David Almond, award-winning writer of Skellig and My Dad’s A Birdman. 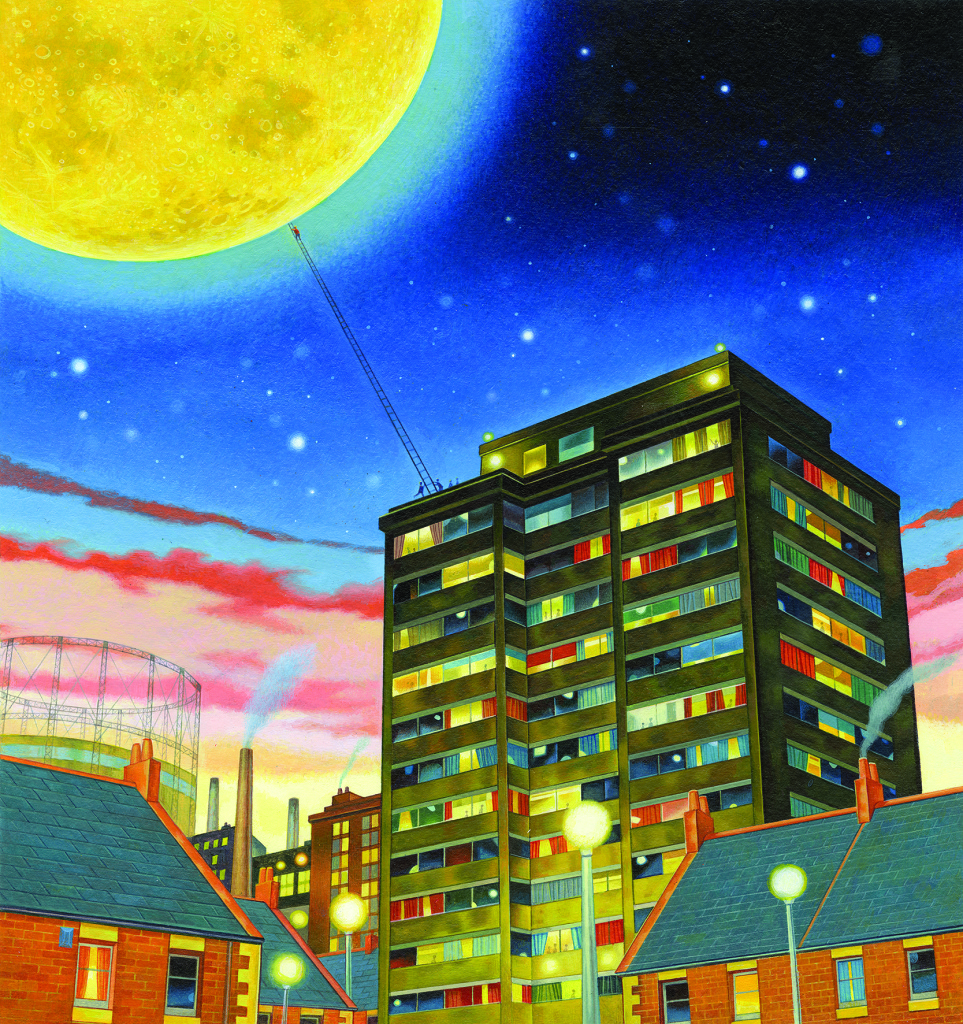 Thanks to the R&D performers who helped develop the show:
Charlotte Dubery & Simon Palmer

Well, what a triumph of a play. A simply wonderful story brought to the stage in such a telling, touching, funny, serious, and beautiful way.

This story had a life of its own. At the start, all I knew was that a boy named Paul lived at the bottom of a huge apartment block. He wanted to break free, to go right to the top of the block, and to touch the sky. So off he went. My words were like his footsteps as he climbed. One word then another, one stair then another. I didn’t plan the people he met. I never quite knew what anyone was about to say or to do. I never expected that I’d write about a flying poodle, or about an ex-soldier who has spent much of his life with a bag on his head. I was often as amazed and bemused by the events as Paul was.

I started to realise that the top of the apartment block wasn’t Paul’s final aim. His imagination was bigger than that. He wanted to leave the apartment block and the earth itself, and to climb into the moon. For some reason, he had this theory that the moon is not the moon but is a big hole in the sky. To prove that the theory was true, he needed the help of his parents and his new friends. Fortunately though they all realised that what was going on was really rather peculiar, they pulled together and came to Paul’s help. And so he kept on climbing, heading for the big bright moon, wondering (like me) what he would find there…

It was a lovely book to write. I really came to admire Paul. He’s a brave lad with an inquiring mind and an open heart. He brings out the best in the people he meets. It is a tale about courage and community, about creativity and imagination, and though there are touches of sadness in it, I think it’s a happy and optimistic tale.

I knew from the start that I wanted it to be illustrated, and I was fortunate that the wonderful Polly Dunbar fell in love with Paul and his story. She brought her own vision to the tale, and came up with a stream of brilliant pictures, which help to make the book such a beautiful object.

I was delighted when the people at Theatre Alibi asked if I’d allow them to adapt the book for the stage. I jumped at the chance and I’m so glad that I did. Daniel Jamieson’s adaptation is brilliant. The show is beautiful, funny, strange and very moving. It’s such a joy to see my story recreated like this. But that’s the way with stories. In books, with their neat lines of print and their perfectly bound pages, a story looks like it couldn’t be any other way. But that’s an illusion. A reader comes along, and the story and it characters jump into the reader’s imagination and are recreated there. And when the story is put on stage, it is recreated yet again, with actors, puppets, music, jokes, lights, movement, stage design. We all sit down together in a shared space, and there it is, unfolding before us, the story about a boy called Paul, who has the strange belief that he can climb into the moon.