When Arthur Rowe bumbles into a garden fête during the Blitz he’s haunted by his past and innocent of his future. But from the moment he enters Mrs Bellairs’ fortune-teller’s tent he trips into a hell of corruption and betrayal where he’s way, way out of his depth.

With a powerful whiff of Hitchcock and echoes of film noir classic The Third Man, The Ministry of Fear is both taut espionage thriller and unnerving portrait of a mind in free fall. Renowned for creating exciting and imaginative work, Theatre Alibi brings its unique style to Graham Greene’s surreal masterpiece. 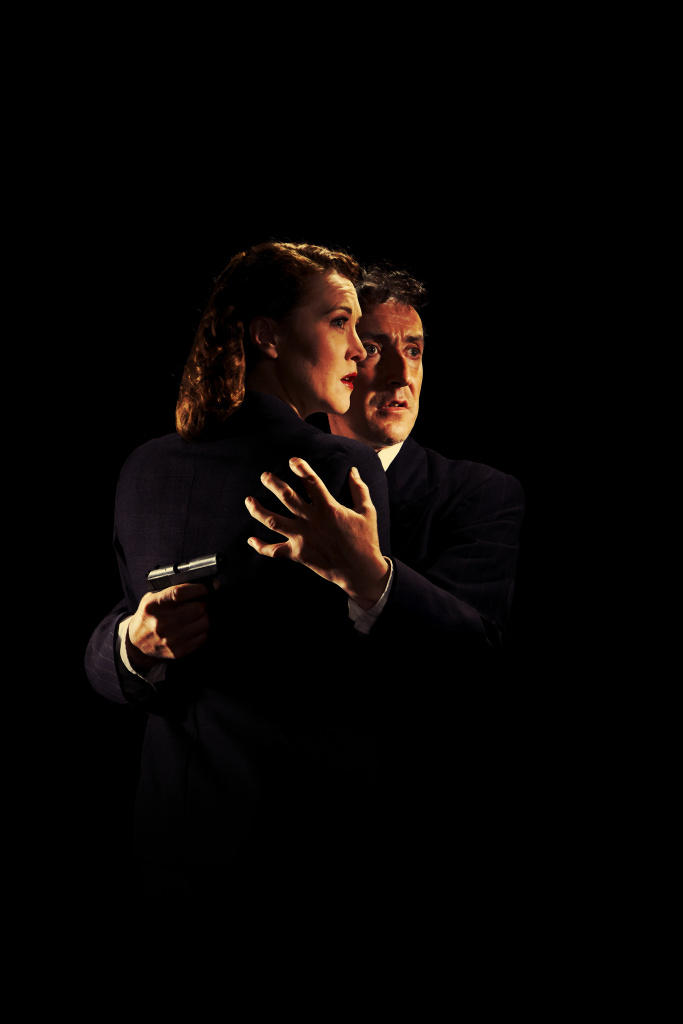 Daniel Jamieson’s superb adaptation of Graham Greene’s The Ministry of Fear is a triumph for Theatre Alibi, cleverly encapsulating its fascinating mix of suspense and surreal humou

A superb, engrossing and intriguing play with light and shade, comedy, tragedy and suspense

Graham Greene separated his novels into “entertainments” and more serious works and The Ministry of Fear he classed as an entertainment. However, critical opinion has it that, perhaps more than any other of his novels, this one lies somewhere between the two. This hybrid quality gives the novel a strangely contemporary feel for a book written in 1942 and it offers us, as theatre-makers, the glorious best of both worlds to work with.

On one level the story is a compelling thriller. Greene took popular forms and used them to his own ends long before it was fashionable for “serious” writers to do so. The Ministry of Fear is a spy story – Greene obviously relishes giving us a cryptic plot to unravel – but there is also a wicked humour to the novel. He seems to take as much fun in subverting the genre as in celebrating it. Only in a Graham Greene spy novel would the protagonist be drawn into a sinister plot by guessing the weight of a fruit cake at a garden fete. The book is populated with characters that leap off the page with the vividness of a turn by Alistair Sim or Alec Guiness. Many sequences have the whiff of a surreal Ealing comedy about them. There is also a moodily understated love story, the unspoken electricity of which has the chance to be felt in the air on stage.

In a darker vein, Greene offers us a startlingly real depiction of the Blitz.

“…an umbrella shop was burning at the corner of Oxford Street: in Wardour Street he walked through a cloud of grit: a man with a grey, dusty face leant against a wall and laughed and a warden said sharply, ‘That’s enough now. It’s nothing to laugh about.’ ”

Greene lived in London through the first part of the war and volunteered as an Air Raid Warden. He experienced one of the worst raids of the Blitz in which a bomb fell on the Victoria Club where 350 Canadian soldiers were billeted. In a letter to his mother he wrote, “…One’s first corpse in the Canadian place was not nearly as bad as one expected. It seemed just a bit of the rubble. What remains as nastiest were the crowds of people who were cut by glass, in rather squalid, bloodstained pyjamas… I was lucky when the mine went off… We got down on our haunches, no time for more, and a shop window showered on top of us without cutting any of us.” His family home on Clapham Common was flattened by a bomb but Greene seemed to share the ambivalence of Arthur Rowe, the central character in The Ministry of Fear, about the destruction, almost glad to be rid of a place that had come to represent the burdens of earlier life. About Rowe, he writes,

“…After a raid he used to sally out and note with a kind of hope that this restaurant or that shop existed no longer – it was like loosening the bars of a prison cell one by one.”

Another thing that gives the novel a darker tone is its portrayal of Arthur Rowe as a man in moral turmoil. Greene was a devout, if idiosyncratic, Catholic. In his work, and his life, he was constantly struggling to reconcile his faith with the complexities and cruelties of the age he was living through. Many of his characters are herded by circumstance into a moral impasse. They might be good at heart but this is no longer sufficient to guide them out of the moral maze into which they have stumbled. Rowe has killed out of pity. Years after, still racked by guilt, he randomly opens a prayer book in a dusty auction house.

“ ‘Let not man prevail,’ he read, and the truth of the appeal chimed like music. For in all the world outside that room man had indeed prevailed; he had himself prevailed; it wasn’t only evil men who did these things. Courage smashes a cathedral, endurance lets a city starve, pity kills… we are trapped and betrayed by our virtues.”

Greene doesn’t flinch from exposing Rowe’s weaknesses – he makes the story a sort of trial of moral escapology for Rowe, binding him in impossible chains and plunging him underwater in a glass tank before our eyes. But Greene’s mastery is to make us identify with Rowe irresistibly. We recognise him as someone like us. We’d have to be hard-hearted not to like him. Whether he quite escapes I shan’t reveal, (Greene’s protagonists often don’t) but his struggle becomes our struggle. We hold our breath for him, willing him to be free.